Queen of the Dead 46 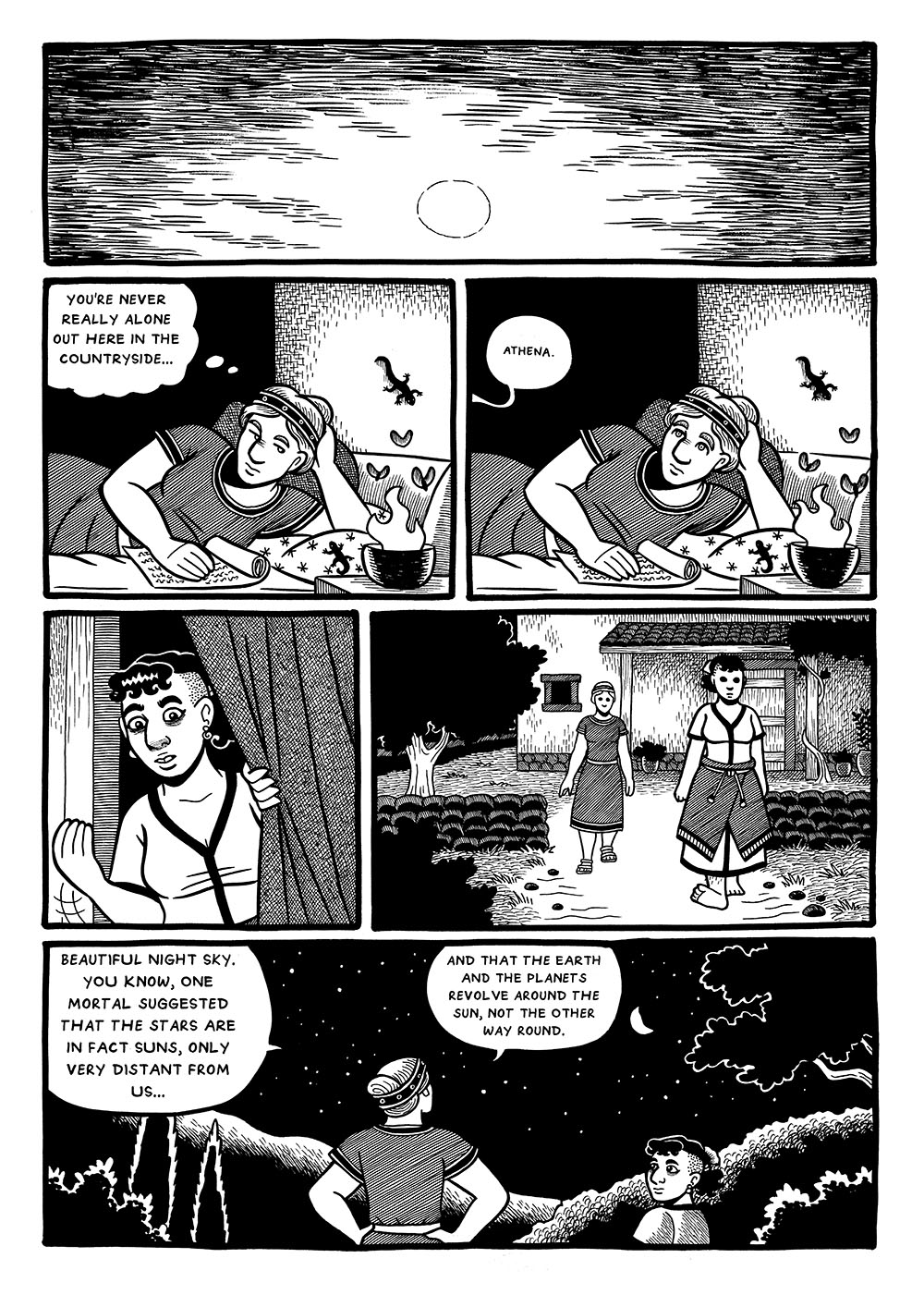 Save My Place | Load My Place
rate this page:

I’m a bit unsure about Athena’s replies in the last panel. There was indeed an ancient Greek astronomer who suggested these things, Aristarchus of Samos, but he lived c. 310-230 BCE and I usually try not to include things that are later than the Classical period (not that the comics take place at a certain time period, I just feel like I have to draw the line somewhere).

A little bit of headcanon/fan fiction to explain the apparent disparity:

Imagine a very intelligent proto-philosopher sitting in a tavern sometime about 600 BCE.

Athena popped in to the tavern for a drink and sat next to the drinker/thinker who was gazing into their wine. "An obol for your thoughts" the goddess ventured.

"I was just wondering why we can't see distant lands though we can walk to them in only a few hours. The land always curves down, eventually, though mountains interrupt it."

One amphora later, the drinker had been captivated by Athena's bright, intelligent gaze and analytical mind for five hours. After a very satisfying discussion, the conclusion was reached that the Earth is a sphere, the Moon and planets are also rocky spheres and all could, possibly, circle the sun. Clearly the Earth would only need a small chariot compared to the Sun and it could be made out of wood rather than fire-resistant metal - so that would be much more believable.

In a dark corner of the tavern, Dionysos laughs to himself with pure pleasure and, unseen, raises his amethyst goblet to Athena. His family each turn his gift to such different uses.

"But the stars, what lamp could last so long and give such a light that we see it from so far beyond the Sun... Oh!"

One last cup and the drinker thanked Athena for her company and wise conversation and bid her farewell.

"Not many deep thinkers among the farmers here. Are you staying around here?"

"No, I wander tirelessly like the planets. I hope we can talk again, perhaps when I visit my uncle's lands. They are nearby."

Wending their way home though the night with the owls calling and the olive trees rustling in a gentle, warm breeze, head whirling with wine-dark skies and long-haired stars, the thinker was filled with inspiration, delight and wonder.

A few days later the thinker tried to explain to their friends about their new insights into the beauty of the Cosmos. The friends laughed. They did not mention it again.

The thinker returned to their trade as a weaver. The tapestries were now crafted with such a sense of beauty, the patterns so right, so correct, so in keeping with the way things are, so true. Though composed of the usual threads, warp and weft, they spoke to the heart of the viewer like a song made solid. People competed to buy them. The local market where the thinker had their stall became famous far and wide.

Most of the buyers could not read. Those that did read the prettily woven script around the edges of the patterns thought them good poetry but quite mad. Within a few centuries those tapestries were just dust blowing through the olive groves.

This was such a beautiful little story. Thank you for sharing it! ^^